HOW TO DETERMINE THE SEX quail 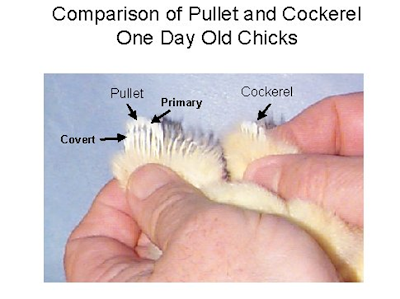 Sex determination is generally carried out on poultry for egg producers.
In the doc sexing can be done by:
1. Seeing coat color (auto sexing): some strains are sex-linked chickens on coat color (color of the plumage)
2. Based on the growth rate of wing feathers
a. Long wing feathers doc = length fur body coverings (slow)
b. Growth over the long wing feathers of feathers cover the body (fast)
3. Cloaka open method (methode vent), This method is usually done at the doc and dod. At dod have high level of accuracy and easier. In the male birds will look small bulge, the females do not visible bulge. This method causes doc stress, improve 1% mortality and the transmission of disease by bacteria or virus.

Determine the sex of quail

The easiest way is to look after the child plumage quail 3 weeks of age , because at this age children quail feathers are fully developed, especially in Cortunix cortunix japonica ( Japanese quail ).

Differences in male and female cortunix Cortunix japonica is to see chest hair. In the male quail cover chest hair color is red brown ( dark brown ) , there are no lines or dark patches.

Female bird chest hair red or brown and there is a line of black spots. Quail can also be differentiated sex after age of 1.5 months, that is by getting to know his voice.

Quail males will crow loudly like partridges, being female does not . Another characteristic is body weight.
Quail females generally have greater weight than male quail .

Similarly, the form of his ass, male quail and big round ass are the smaller females.
Thank you.
« Next Post
Previous Post »